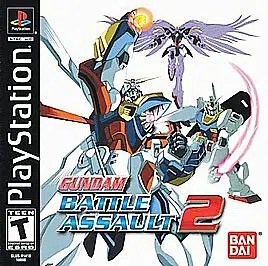 Gundam: Battle Assault 2 at a Glance

Welcome to a future world where gigantic mobile suits and their human pilots wage a hi-tech winner-take-all war. Your fighting skills will be put to the ultimate test, as you challenge other pilots for the right to be called the best. As Burning Gundam, you’re a martial arts specialist in search of your brother. Then as Heero Yuy in Gundam Wing, attempt to destroy Trieze Khushrenada. Finally, use Gundam RX-78 to wage war against the Principality of Zeon. Based on Mobile Suit Gundam, the hugely popular Japanese anime series, and also seen on TV and available on DVD, Gundam Battle Assault 2 proves once and for all that the bigger they are, the harder they brawl!

Here are a few of the most interesting Gundam: Battle Assault 2 facts and stats I was able to dig up. As always, be sure to check back in the future as I will be updating this post as new and updated stats become available.

Where to purchase Gundam: Battle Assault 2: